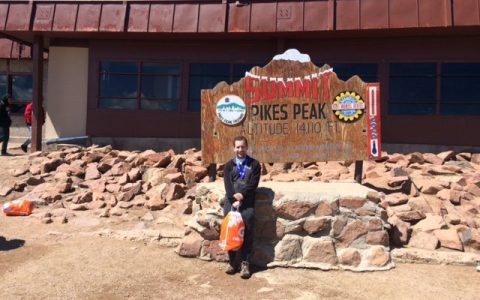 Why Pikes Peak For a long time, I’ve wanted to take a vacation in the Rockies. The Appalachians can’t really compare in terms of size and drama, and as a mountain lover, I knew I was long overdue for some real mountains. As I’ve gotten into trail running over the past few years, and started […]

For a long time, I’ve wanted to take a vacation in the Rockies. The Appalachians can’t really compare in terms of size and drama, and as a mountain lover, I knew I was long overdue for some real mountains. As I’ve gotten into trail running over the past few years, and started learning about many of the challenging events out west, my excitement to take a trip out there grew.

I learned about the Pikes Peak Ascent and Marathon from Trail Runner magazine, and I thought the Ascent sounded like a first great “real mountain” race. The distance was only 13 miles, so I wouldn’t have to worry about a DNF, as I probably would have if I had tried to make my first high-altitude race an ultra. But even though the distance was mild, the course was pretty extreme: 7,700 feet of climbing up one of America’s most famous mountains, with a finish line above 14,000 feet. I had no idea what 14,000 feet would feel like. Hell, I had never really run much above 2,000 feet.

When I registered for the event (which sells out quickly), I didn’t realize that the Marathon (held the following day) is the same exact course, only it’s an out-and-back instead of a point-to-point. In other words, there isn’t really any additional climbing for the Marathon–the second half is all downhill. I thought, “Shit, why not do that? If I can make it up, I’m sure I can make it back down.” But after emailing the race director, I found out it was too late to switch. Both events were sold out.

Clearly, there was no way to train for Colorado altitude in Pennsylvania, but I did work hard this summer to get ready for the climbing. Hill repeats most Tuesdays on Mount Penn (a 475 foot hill across the street from my house, which I would climb 5 or 6 times), and long runs on the AT on weekends. I had also planned to do one big final training day on Mount Tammany, which is a 1,200 foot climb at the Delaware Water Gap. The idea was to climb it 6 times in a row, about 3 weeks before the race. But the morning I drove out there, I got a little spooked when I saw a black bear at the top after my first ascent. I decided to explore some other trails around the Water Gap that day, and still ended up with 5,000+ feet of climbing.

Yuriko and I weren’t sure if we would fly or drive out to Colorado. Flying would mean, obviously, far less travel time, but it also meant we couldn’t bring our dog, Kima. Ultimately we decided Kima had to come, so we rented a car and prepared for the 24 hours of driving it would take to get to Colorado Springs from Reading.

Luckily, we have some amazing friends who live at exactly the halfway point: St. Louis. We crashed with them both on the way out and the way back, and I only wish we could’ve spent more time visiting and catching up with them.

On our second travel day, we ran into a bit of a scare in west Kansas. Google Maps had us take US 40, instead of staying on Interstate 70, as we approached the Colorado border. When we left the interstate, we had a quarter tank of gas, and I figured I’d fill up at the next gas station I saw. I just assumed there would be towns with open gas stations on US 40. But I was wrong. I’ve never driven through a more empty, desolate part of the country. It was at least 50 miles before we found a place to fill up, and by that point we were running on fumes with the AC off, warning lights blinking, wondering how long we would be stuck in the middle of nowhere if we did run out. Thank God for the Shell Station in Sharon Springs.

Apparently Colorado Springs has a reputation for being a super-conservative town, which we weren’t so happy to learn, but luckily politics wasn’t an issue during our one-week stay. We rented a cool little house not far from downtown via Airbnb; it was next to a big park. After arriving late on Sunday, we spent the next four days doing short day hikes with Kima. Some of the highlights:

Garden of the Gods: Touristy and somewhat crowded, but really beautiful and strange rock formations.

The “back way” to Pikes Peak: This was an ambitious hike I did with Kima, starting at 10,000 feet from “Crags Trailhead” west of Pikes Peak. (The race goes up to the peak on a different trail, from the east.) We did this on Tuesday, and it was a nice introduction to the altitude, though Kima got a little freaked out by the rock scrambling toward the end. Amazing views above the treeline. Some light snow and hail at the top. Yuriko drove up the toll road to the peak after dropping us off at the trailhead so we wouldn’t have to hike back down. Because of the road (and a railroad too, which also goes to the peak), there are lots of tourists at the top, and there’s also a cafe and gift shop. It was nice to get some coffee and donuts after that cold, dizzying hike.

Oh, and we bought some THC-infused chocolate bars at Maggie’s Farm in Manitou Springs. Good stuff.

The day before the race, Yuriko and I got a couple’s massage at a Spa near Garden of the Gods. The mountain weather forecast called for about 6 inches of snow on the peak that night, which freaked me out a bit. I was happy for the cool temps, but I didn’t want to be sloshing around a snowy peak at the end.

I’m glad we got there a week before the race to explore the area and acclimate to the altitude, but there was definitely an intimidation factor as the peak loomed over us on the horizon every day. It was just a little hard to visualize how I was going to go from town to that spot way, way, way up there all in one morning.

The forecasted snow never materialized (big relief), and the race-time temperature at the starting line was in the upper 40s. Hard to believe it was August. Also hard to believe that it would be even colder at the end of the race. (While the temperature at 6,000 feet would get up to 80 that day, it was only in the upper 30s at the top of the mountain when I finished.)

The race starts in downtown Manitou Springs. Yuriko dropped me off around 6:30am for the 7:00am start time. I was in “Wave 10”, which meant I didn’t really start until 7:10. The first mile of the race is on road, as you run from the center of town to the beginning of Barr Trail. It’s a gradual climb (243 feet), and it took me about 11 minutes.

Then the real climbing starts, and so does the congestion. For miles 2, 3, and 4, you average about 700 feet of climb per mile, and it’s pretty much impossible to get around anyone most of the time. I kept waiting for the pack to thin out a bit, but it never really did. Many of the runners in the waves ahead of mine were going quite slow. Maybe I should’ve been in an earlier wave, or maybe 1,700 runners on that narrow single-track trail is just too much. In any case, for much of the race, my pace was dictated by the person in front of me.

Not that I could’ve gone that much faster. With the rocky terrain and steep climbs, it’s a slow event no matter what.

There is, however, a little reprieve in the middle miles. Just as we got above the clouds, there were some runnable stretches, especially during miles 6 and 7, which were my fastest (apart from mile 1) at 13:43 and 13:46 respectively.

After that middle section, you climb 600 or 700 feet every mile the rest of the way. I was eating a gel every 30 minutes and trying to drink as much water as I could. Even though it wasn’t hot or humid, conventional wisdom has it that solid hydration helps prevent altitude sickness.

The aid stations were every couple miles, so I never came close to running out of water. I didn’t take any food from them, except a handful of trail mix toward the end.

One weird thing that I sort of liked was that volunteers and spectators frequently would address you by name, since our first names were on our bibs. (“Matthew, can I fill up your water?” “Nice work, Matthew–you still look fresh!”)

Three hours in, I popped above the tree line for the final three miles (and 2,000 feet of climb). It was cool, but sunny and exposed, so I took out my sunscreen stick and tried to protect my neck and face. I still felt strong, and it was a little easier to hop around some of the runners who were clearly running out of gas.

The closer I got to the end, the more “zombie hikers” I seemed to pass, as well as a few guys in some serious pain from cramping. I started to get a little dizzy myself, but my legs still felt good, and I pushed on towards the peak.

Some combination of lack of oxygen and excitement started to get me as I approached the finish line, and I wasn’t sure if I was about to cry or hyperventilate. Yuriko found me quickly and after getting out of the crowd, I was finally able to catch my breath and take in the view.

After changing my clothes and eating a protein bar, we took a shuttle bus to our rental car, and then drove back to Manitou Springs, where the post-race festivities were. (We had to pull off the road for a few minutes to let the brakes cool — it’s a well-maintained road, but steep and treacherous nonetheless.)

It felt so hot back in town compared to the peak, but some local beer helped me relax and cool off. Along with the beer, there was pizza and a long-sleeve finisher’s shirt (and a medal, if you’re into that).

Overall, it was a great event on an incredibly beautiful course. The congestion was an issue, but if you aren’t too fixated on a particular time (and I wasn’t), then it’s not that big of a deal. I’d love to do it again, and if I do, I’ll definitely do the marathon. (This must be even more congested, with 2-way traffic, but I think I’d really enjoy flying through a lot of the downhill, if my knees could take it.)