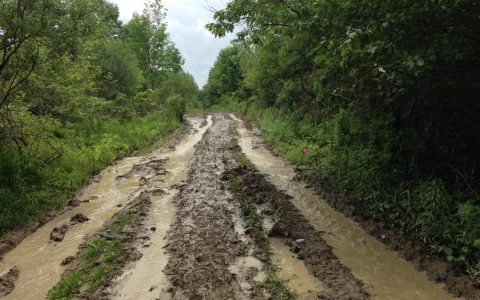 Finger Lakes 50’s! I signed up for this on January 1st as soon as it opened, knowing it has a reputation for selling out quick. It has a limited field entry for 250 runners and this is for the 25k, 50k, and 50 miler options. The race itself is popular and established, so it sold […]

Finger Lakes 50’s! I signed up for this on January 1st as soon as it opened, knowing it has a reputation for selling out quick. It has a limited field entry for 250 runners and this is for the 25k, 50k, and 50 miler options. The race itself is popular and established, so it sold out in 3-1/2 hours. The plan when signing up was to do the 50k, but I also knew you could make the decision to move up to the 50 miler the day of, and during the race.

The prelude: My spring races were the Naked Bavarian 20 miler (which went well) , The HAT50K ( which I rolled my ankle and had to drop @ 18miles) and my confidence builder race, the Dirty German 50K. DG was a downpour with lots of mud. Many runners dropped but I toughed it out to finish in 5:55. Way above my goal of sub 5 but the conditions didn’t help so it was a great mental victory just to finish.

The course: This consists of 16.5 mile loops. 1 for 25, 2 for 50k and 3 for 50mile plus 1/2 mile baby loop. You go through single track, county dirt roads and through several cow pastures where you must open and close gates. And yes, there are cows present while you are running. Their t-shirts say, ” Don’t let the Cows Out”! Total elevation for each loop is 1650′ and there are a couple of minor stream crossings.  The rest of the course isn’t terribly rocky but there is a section where there are alot of board walks which are nasty in the rain but nasty overall due to broken boards.

The race day: Weather was rainy leading up to this, and the course already had a reputation for being muddy. It goes through several cow pastures which already are muddy. And when I say mud, I mean shoe grabbing mud. I’ll explain more later. The morning of as I was getting ready, a real nasty thunderstorm broke out with heavy rain. I knew I was in for it today. The race started on time and I placed myself in the middle of the pack, which is where I belong. The first 2 miles were slow, as there were some cautious runners ahead who were trying to not get their feet muddy. I passed these people where I could. The first loop was messy but not terrible and I came through around 3:25. Lots of runner who were going to do the 50 miler already were talking of dropping to 50k. At this point, I hadn’t made my decision yet.

The second loop started and people were already gassed from running in mud. The rain picked up as we started the second lap and the course conditions were deteriorating quickly. Most of the single track was now running streams and heavy pockets of mud were forming. The cow pastures where mostly ankle deep mud. For this lap I teamed up with a young lady from Brooklyn, who kept pace with me for most of the 2nd lap. She BQ’d, so I knew she wasn’t some complete newbie and she also had run this course under normal conditions a few years back. She said this by far was the worst conditions for this course, ever. The last 5 miles of the send loop were mostly reduced to walking as there was thick mud with running water above. Sometimes you stepped in and landed solidly and sometimes you went in halfway to your knee. Near the end of this loop I slowed up to conserve some energy and let her go. She made her mind up she was done @ 50k. My mind, however was still not made up. So I came around and had to make my decision before hitting the timing mats. I stopped and said F%&K it, and went for the 50 miler. I was around 7:19 and I had a 1/2 hour cushion for the cutoff. I had my good friend up with me, Gary Gehret, and he’s kind of like my God father of running. He just turned 60 and doesn’t do many ultras but he wanted to pace me the last lap ( pacing only available the last lap). So I quickly changed my shoes / socks and off we were for lap 3.

Loop 3 the rain picked up again and the course was now extremely slippery, muddy with stream running all the time. It was the worst I had ever run in and we were bitching the whole time. We were doing ok on time but I knew there were a few behind who weren’t going to make the cut. We just kept moving, in spite of the conditions. The small stream crossings were now somewhat substantial and a few downhills were downright dangerous with mud, pine needles and a gorge beside. I didn’t have my phone on me, so I really didn’t get any pics of how nasty it really was. So, I finished and was DFL but I finished it! Most of the runners dropped back to the 50K or didn’t make the cut. I was satisfied that I finished although my goal of under 10 hours was not an option.

The gear: Lap one and two I wore the Peregrine 6 with Swiftwick sock. Perfect for the conditions. Lap 3 I changed to my Newton BOCO AT2, which are good but not for this mud. I made it work since the Peregrines where filled with caked on mud. For hydration I used the UD AK2/0 vest with front bottles. I had pre made bottles of Tailwind and each loop I could replenish. I also used GU Rocktane gels and had some SCaps on hand, in case I needed.

Overall, the Finger Lakes Running Club does a real nice job. Aid stations were well placed and good. They had a hard time keeping the food dry with all of the rain. They also did a very good job of logging numbers at several points on the course. Even though this was hard running in mud, this was a huge mental victory for me and doing the DG50k definitely prepared me for this. I would do this again, but would like to do it in better conditions.