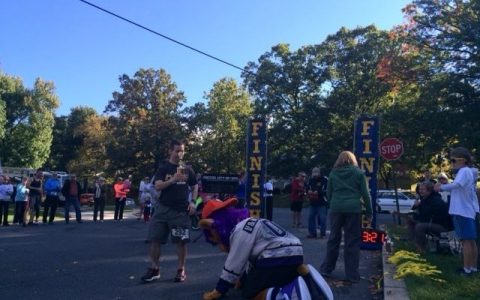 I don’t run 5Ks very often–I like longer distances and trail races, typically, where I don’t feel so bad about plodding along at a slowish pace, stopping to pee or eat something, or walking up a steep hill. But this weekend there was a 5K less than a mile from home, to benefit the Vision Resource Center of Berks County, so I figured why not jog down the hill and give it a shot. My wife, Yuriko, said she was game, too.

Injury #1: I wanted to jog that .7 miles to the start in order to warm-up (racetime temp was a chilly 47 degrees), but Y wanted to save her energy, so she planned to cruise on over in her Smart Car. On her way to the driver’s seat, however, she was stung by a bee. FOR THE FIRST TIME IN HER LIFE!! Sure, it’s unlucky to be stung by a bee before a 5K (though not as unlucky as stomping on a yellow jacket nest a few miles into your first 50K), but it’s pretty darned lucky to make it [wife’s age redacted] years before your first bee sting.

Turnout: No one showed up for this race. I mean, we were there, and a handful of other people, but turnout was super small. 31 runners. You know what that means: easy award!

Course: The course started at the corner of Hampden Blvd and Rockland St, just barely within Reading city limits, and headed down Rockland, wiggling over to 13th Street. This initial downhill made for a fast start, as we lost 100 feet of elevation in the first 2/3 of a mile. Then it was a steady, gradual incline as we headed south on 13th Street, past Albright College, toward Reading High School. The incline continued as we made a sharp left on Hampden Blvd, heading northeast, back toward the start. The extended incline was about 130 feet over 1.3 miles. Then it was downhill again, as the course turned left onto Bern Street and wrapped around the Albright baseball field, back over to Rockland, and up the hill we ran down to start. I think it was about 200 feet of gain total.

The Competition: Two fairly fast runners showed up–one man (John Byrne), one woman (Erin Benner)–and they pulled ahead of me pretty much right away. As the race progressed, John pulled away from Erin, and Erin pulled away from me. She wasn’t catching him, and I wasn’t catching her. Didn’t see what happened behind me, but nobody passed me. Pretty boring, I guess, but I liked it–I had never been in a race where no one passed me. Nor had I ever finished top 3. This wasn’t my fastest 5K ever, but it was my 2nd fastest (22:27, official time). Afterwards, the two runners who finished ahead of me were talking about how hilly the course was, which I found hard to believe. For a trail runner, one 70 foot hill and a gradual 130 foot incline is pretty damned flat.

Wife’s PR: Yuriko doesn’t love running, but she’s been trying to get into it for awhile now, mostly because she’s super sweet and wants to share in everything that is important to me. So she usually runs/walks these 5Ks, but this was definitely her fastest (35:15), and I think her first in which she averaged under 12 min / mile! All after the first bee sting of her life!

Injury #2: After I finished, I jogged back along the course to find Yuriko and be her “pacer” for the last 1/2 mile or so. Right before the finish line, I turned off the road (since I had already finished), but tripped over the curb and scraped up my leg. (Trail runner will find a way to bleed!) Nothing a little witch hazel can’t clean up.

Goodies: Nice burgundy t-shirt. Pretzels and apples. Cash hot-dog-bar ($1 per), which we did not try. Pumpkin carving. Pictures with the Reading Royals mascot.

Critique: A little uncomfortable running on 13th Street and Hampden Blvd without any traffic control. Not many runners.