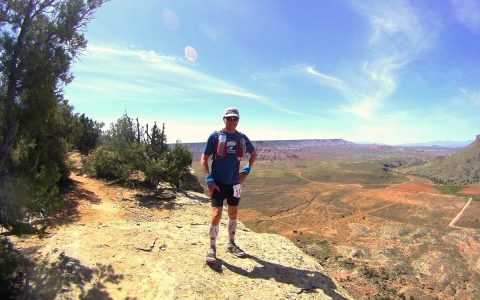 On the ledge of Gooseberry Mesa 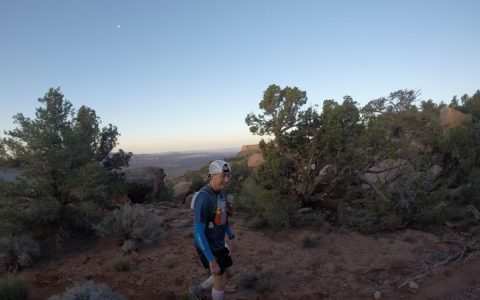 Up on the Flying Monkey Mesa

Claimed the Finisher's Buckle
Posted in

Well this is an extremely late “race report” on the Zion 100 mile run I did on April 10-11, 2015 in Virgin, Utah. In fact, it won’t be much of a race report. I just jotted down some quick notes after the race, and then captured the experience in a video that I put together […]

Well this is an extremely late “race report” on the Zion 100 mile run I did on April 10-11, 2015 in Virgin, Utah. In fact, it won’t be much of a race report. I just jotted down some quick notes after the race, and then captured the experience in a video that I put together with GoPro footage from Gilbert Gray, my wife Telly, and myself. Then added some photos taken by the same folks, plus Maggi Gray, Aaryn Riccadonna, and Photosynthetix.
The race was quite a challenge, being hot during day, with very little shade, and very cold at night.
There was lots of dry red dust getting kicked up by runners and passing cars, finding its way into our lungs. I was coughing up red dirt until several days after the event.
Some of the race, particularly up on the slick rock on the mesas, was on mountain biking trails.
Going up the Flying Monkey mesa, there was even a rope to climb up a very steep portion, or one could traverse a diagonal path up the cliff, as long as you didn’t lose your footing and plunge down the steep cliff on the side. It was nice and challenging and made for some pretty dramatic views (see the video!)
The Guacamole aid station was an oasis upon return from the loop on the slick rock as it was exposed up on the mesa and very hot at that time of day.
One thing about Zion was that it provided broad vistas of the landscape allowing one to see the big picture of the course, emphasizing the enormity of running 100 miles.
In a few instances we would have to give way to mountain bikers on the trails, and it would be a bit amusing when the bikers ask, “how far are you running, and how far to go?” – the response would be something like “Oh, 80 miles done, only 20 more to go”, which blew their minds.
On the first day, I was feeling pretty sluggish and Gil and I just ran together. He would wait for me whenever I wanted to shoot some photos or video of something, and when I just felt like walking at various points. It was nice to have someone for company especially during the cold night portion when we were doing a lot of climbing and descending on some steep mesas.
On the second day, Gil started blistering – we patched it up before the final blue loop.
During the blue loop Gil asked me to go ahead. I would hear nothing of it.
The goal was just to finish before cutoff at this point, so what would be the point of me going ahead?  I wanted to make sure Gil would finish, so I stuck with him.
I was letting him set the pace, so I wasn’t having him move faster than he was comfortable with.
Long story short, Gil and I finished together, and we were happy to complete another adventure together in beautiful Zion.