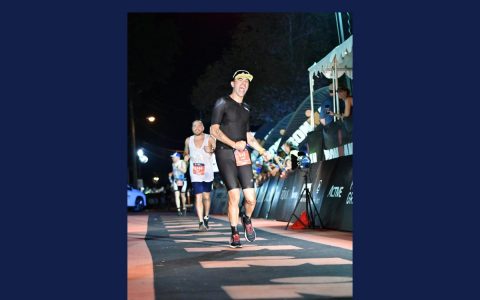 As I write my race report for IRONMAN #5, I can’t help but to think that #4 is still outstanding! I honestly been meaning to do it for quite a long time now since I know there is some folks I must acknowledge as being integral into getting me here. Something has been keeping me […]

As I write my race report for IRONMAN #5, I can’t help but to think that #4 is still outstanding! I honestly been meaning to do it for quite a long time now since I know there is some folks I must acknowledge as being integral into getting me here. Something has been keeping me from putting #4 down on paper which is quite strange since it was a unique experience even as IRONMAN races go! Anyway… I digress! Let’s talk IRONMAN Maryland.

So getting past the drive, and the town, and the logistics (you can read that here) , the biggest thing about this race is that I was doing it with my wife! In fact, I was doing this with my wife, my brother, some friends and training partners, but for everyone that knows the time commitments involved in training for a full IRONMAN race, let me just repeat that I was doing an IRONMAN with my wife!!! (If you don’t know why that is big it just takes too long to explain).

A triathlon is not a team sport and you are on your own pretty much from the start, so I had to do my thing, and let her do her thing, but until we crossed paths on the course (which I knew was going to be many hours later on the run part) there was a sense that the race was only going to be a race after I got validation that “the team” was intact and fully functional.

From a race strategy perspective I had two goals that were not mutually exclusive: Attempt to PR on an already familiar course. Finish the race and put another number on the scoreboard. Borrowing something going awry, the later seems to be what would happen anyway if the first was not achieved, but the shifting of state of mind from going deep into the pain cave, to a state of gratitude and acceptance, is what was being considered as the goal for the second.

So all the talk leading up to the race was about the jellies this year! Lots of talk last year too but this year it was bad! Took both full and sleeveless wetsuits down but on race day I made the decision that with lots of Sea Safe and vaseline, I should be fine going sleeveless. That may have been a mistake. I went in the water and I think I must have hit all those little bastards along the way and they just got all tangled up around my arms. It burned! But I cracked on. Swim time was about 4 minutes faster (which I just checked) and that seemed about right considering I have not really been focusing much on it and mostly just maintaining. Those little bastards got me good though! Went straight for the vinegar coming out of the water but it had no effect!

The bike is usually where I get uber tri nerdy and technical. Also where I made a big mistake this time. I struggle with getting considerable power gains from season to season which I know is not from my lack of trying. Sometimes I slack, but sometimes I train hard, and the reality is that I don’t build muscular strength easily. After 40 it becomes a function of age but this was always the case as evident by my not so Shwarzenegger like frame. For fun I actually did a DNA test which confirmed I will never have the explosive muscular strength of a sprinter, but I do have a propensity for the slower endurance activities. Monika on the other hand was blessed with both. I swear I think sometimes she sneezes and builds muscle!

Anyway, low hanging fruit for me is aero gains. That’s my best card to play. So, as to be expected, I got a very fine, very aero, very UCI illegal tri suit (Endura D2Z), some Rule28 aero sleeves and aero gloves, and the very difficult to find Bambino pro evo TT helmet (a Frankfurt purchase).

My position was painfully good (not perfect), the kit was on point, and the bike was 9 minutes faster this year on practically the same power!

Something new this year was that I did try to hold a power number. Even though I have power meter readings showing on my bike computer, I use it mostly for training. When racing I go by feel using mostly cadence as my main metric. After a two month ramp up of short but high intensity bike training, I felt pretty comfortable with the power numbers that were recommend for me for this distance. They were spot on and felt easy at the beginning and hard at the end. I still lost power as the day went on but it was a really good guide to hold back your effort when the legs are fresh and you just want to go.

After looking at some of the pictures I do think I got to work a bit more on head position. The bike fit was nearly identical so that is all on me. Also I think it is time to take another look at my bike nutrition. I need more flexibility. I prepared 6 bottles with calories for potentially a 6 hour bike. To keep replenishing the calories used up while racing, I need to drink bottle per hour but if I finish early then what?!? This year I went faster so in theory I should have had more of those calories earlier! Also If I don’t feel thirsty I need to keep sucking it down just take the calories and that leads to a very sloshy heavy belly feeling. When I finished the bike I still had a full bottle that was untouched. I did have some cliff blocks along the way to make up for this, but I think I need to re-examine what, and how much, I need to consume.

Oh also my flying dismount was pretty ok!!! Will see if it was captured by the IM camera and will try to add later…

After peeling off my sleeves and gloves I was off to the run. I immediately encounter problems. My race belt was falling because it was weighed down by all the gels I was planning on taking through the run and I could feel my belly was not well! I was confident I could fix this but I needed to get into a groove first. I quickly deteriorated into a walk and could see in the friendly faces of the folks I knew that I was not doing so hot. I don’t recall how but I friended a guy who turned out to also be Portuguese (although we talked for a while before I discovered this). We kept alternating between walking and running and around mile 5 or 6 the demons that had made my belly their home were ready to come out. With the utmost urgency, I took to a porta-potty and unspeakable things took place. It was at this moment that I realized I had made a very bad strategic mistake (the one I had previously mentioned in the bike section). My super aero single piece tri kit was all wet and it had become a chinese puzzle box requiring the contortionist skills of a double jointed circus performer to fit back into. The stifling humid and rancid heat in that very constrained porta-potty from hell, made things so difficult that I was considering busting out in my un-glorious state for fear of passing out into that unholly pot! I did eventually emerge as a new a new man. A relieved man! Lighter in my step and ready to get back in the game. A las goal #1 was slipping away. If I really dug deep I probably could have gone for the PR but I would definitely be risking missing out on remembering the finish line like I did in Frankfurt. Undoubtedly I would still have to use the bathroom again and in fact I was hoping that I would as this is a sign that things are working properly. So I decided at that time that this race was not for time but for fun.

I resumed running and at about mile 7 or 8 I ran into Ken Thomson who smiles and cheers (he saw me at my worst) and tells me Monika was just behind him. She appears along with Megan Kathleen and Alisa Hangenberg and they all looked terrific! Little did I know Monika had been in a bike crash (read her race report for those details).

My belly improved and so did my pace and as I let go of the time number I was chasing, I was able to fully enjoy the rest of the race. I saw and cheered my friends and my family on the course and fully enjoy that finish line knowing that was not the end, and I could see the rest of my crew become IRONMAN!

So what now? No idea! I have not gotten to the end of a season without having most, if not all, of next year already planned! #6 is still a mystery so talk to me about it when you see me and let’s have a beer.

A special thank you to the most fun crew ever! Alisa ‘What’s Taper?!’ Hagenberg, Angela ‘Big Ring’ Lisowski, and Megan ‘Don’t Look at Me When You Pee’ Kathleen. You guys are so strong and I love hanging with you.

Honorable mention of Tom ‘pop my shoulder back in’ Meehan, Karl ‘too speedy to drink’ Koovits, and Ken ‘create my own tailwind’ Thomson for the positive vibes.

Thank you to Barry Barone and the touching rubber crew, and to my coach Tom “The Lizard” Manzi.

A big well done to John “3 second” Santos for completing and becoming an IRONMAN.

Huge thank you to my parents for all that you do and of course my IRONKID and my IRONMAN wife. I wish you had not changed out of those ripped shorts and crossed the finish line with your ass cheek hanging out. That would have been even more epic!