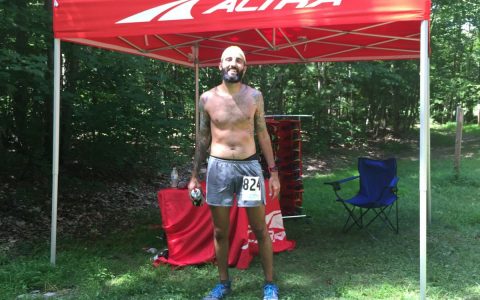 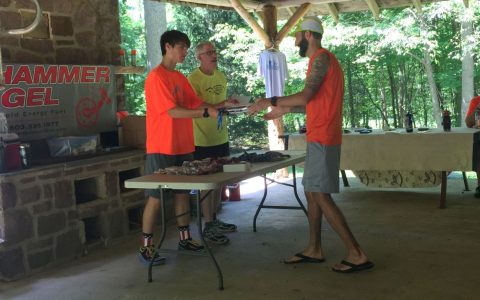 The Leadup: Seven weeks prior to this race I race the Laurel Highlands 70 Miler and that was a grueling 14.5 hours. That race left me with completely toasted, trembling legs and a seemingly perpetual recovery ahead. I learned about the Altra Coventry Woods 6 Hour from the store owner and Race Director Don Morrisson. […]

Seven weeks prior to this race I race the Laurel Highlands 70 Miler and that was a grueling 14.5 hours. That race left me with completely toasted, trembling legs and a seemingly perpetual recovery ahead. I learned about the Altra Coventry Woods 6 Hour from the store owner and Race Director Don Morrisson. I was at the store because I was having issues with my first pair of Hokas (Challenger ATR). The cheap insole wasn’t doing anything and toward the back of my arch was bruised because it kept landing on the giant rubber walls that surround your foot. It’s a strange shoe. Anway, Done gave me a pair of insoles for free and the shoes actually ended up working out for me. The Coventry 6-Hour sounded like an interesting race to follow Laurel Highlands and it would presumably keep me in race shape for my fall A-Race, Blues Cruise 50k. There was a 3-hour option, but whenever there are different lengths of races going on at the same event, the longer ones tend to me the more fun and competitive.

For the seven weeks between races, I felt pretty beat up. I wasn’t fully recovered, but I still wanted to run this race. Three and a half weeks before Coventry, my friends Matt Brophy and I went out to the park the race was held at to preview the course. On the way a deer came out of nowhere and I hit it. And when I say “out of nowhere”, I literally never took my foot off the gas. We were just talking and then BOOM. Like we ran over a landmine. I saw a flash of brown as my hood folded back and the airbag blew up in my face. The cop told Matt and I that we should really get checked out by EMS, we both refused. I had some light brush burns on my knees and insides of my arms, but otherwise I felt fine. Rachel came and picked us up. When we got close to Matt’s house he told me that if I still wanted to go run the course, he could grab his car and take us. OF COURSE! Once at the park we tried to navigate it using the color-coded directions Don gave me and my mental picture of a GPS activity I saw on Strava of a 10k covering the same course. Surprise surprise…we got lost a couple times. But we got a pretty good idea of what the course was like, so it was worth it… I guess?

Being that this was an inaugural event, I had a feeling that it may not be super-competitive. I thought I had a chance for a win or at least a top 3 finish. At check-in I noticed Michael Daigeaun. Last year at the Dirty German 50k he was a 3:23 against my 4:01. That thought of a win went out the window instantly. Then I heard him tell someone that he was running the 3 Hour. Thought of winning right back into my head. I also wanted to run 7 laps in the 6 hours.

The course was advertised as a 10k loop. I had looked at many Strava activities from that loop from a 10k series held there and none of them were even close to 10k. The times were crazy fast for a 10k as well. This race actually had a 10k going on at the same time as the 3 hour and 6 hour. We all started together and did an extra loop so the 10k runners could get 10k in. There was no way it was 10k, and each subsequent loop cut out the extra loop… so you get an idea of how the distance is pretty much a mystery.

With three distances starting together, it’s just utter confusion. You have no idea if the runners ahead of you are running the same race, and you have to be careful not to chase someone who is going to have a 45 minute day while you’re going to have a 6 hour day. I eventually realized that there was a way to tell what race you were in by the bib.

The race starts, like I said, with an uneventful .4 mile loop then you enter the main loop. You go up a driveway, then grass along a roadway, across a field and into the woods where you remain the rest of the loop. In the first 1.5 mile you cdip a bit then climb about 260 feet. After another dip you go up another 250 feet in .6 miles. Then another short downhill and back up another 200 feet in .7 miles. With other small hills you rack up around 830 feet of climb per loop. You basically go up for 4 miles then back down for 1.8 miles. The elevation was more and harder than I remembered when we scoped out the course.

There wasn’t a ton of aid with a small aid station after the start/finish and a water station with some GUs at the halfway point. The main aid station had GUs, a few bowls of Ultra snack food and water. It was manned by a young girl that sat behind it and wasn’t jumping up to fill your bottle like at many races. No Gatorade, no bananas and most importantly NO COKE. Luckily I brought my own Coke.  After the first lap, the halfway aid station was unmanned, and luckily the water never ran out for me (and hopefully no one else).

After my first loop I realized that my goal of 7 laps was not happening as I ran a 55 minute lap and with the climbing each lap, didn’t think I could keep that up let alone improve on it, even if each loop after was shorter. Going into my second lap I saw cones across the driveway we ran up and two people standing in front of them. There was some white arrows painted on the concrete pointing to a driveway to the right. I was confused, looked right at the two people thinking if I was making a wrong turn they’d tell me. Well, once down that road I realized it wasn’t the course, and added about .3 miles to my day.  A mile or so into my second loop I saw my friend Kyle Gery coming the other way. He was recovering from a 100 miler and came out to run with me for two laps. I hammered pretty hard in laps 2 and 3 with times of 54 and 53 minutes. After that third loop Kyle broke off and the 3 hour runners were just about done. I started to lap 6 hour runners and that 4th lap was another in 55 minutes. As I finished the lap I asked my place and they told me I was in 1st with about a 4 minute gap at the end of lap 3. I started to feel the fatigue coming in and the heat was draining me. Into my 5th lap a group of people under a tent were looking at me and talking and one yelled at me to slow down. I later realized that they were the family/friends of the runner behind me.

I started to feel like I needed to reel it in a bit if I wanted a strong last lap. Lap 5 clocked in at an hour flat. They said my gap was now 13 minutes, but they didn’t seem too sure. I had a few slight muscle cramps starting halfway through lap four so I stopped, but some Coke in my bottle, poured a Salt Stick into it and put a few extra Salt Sticks in little baggie in my pocket. Maybe 1/4 of the way into lap 6 I realized I dropped the baggie and had no Salt Sticks left. The cramping got pretty bad and at a few points I yelled in pain. Gotta keep going! Around mile 31 I tripped over something (low electrolytes) and took a pretty good fall. I pushed on and finished my last lap in 59 minutes. The 2nd place runner finished his 6th lap with just 51 seconds to spare, and 20 minutes after I finished.

I had decent race and winning is awesome, but I realize the race wasn’t that competitive with just 35 runners. It was a nice, challenging course and local to me, so the convenience factor was there. I’m not sure if I’ll run this one again as there are so many races and so little time… but maybe if someone breaks my time there and sets a new CR… I’ll be tempted to return!